I just got a call this week that one of my newer watercolors, “Great Blue” won first place at the “A Natural View” show in Gastonia at the Arts on Main Gallery. I didn’t even realize they were having this show and thrilled that this piece was selected! “Great Blue” is a custom framed watercolor, sized 20 x 16″ and available for sale: $750. SOLD

I cannot resist a beautiful, old weathered barn! I found this one with its fading paint is along a NC back road south of North Wilkesboro, NC.  This finished watercolor is custom framed and double matted, 15 x 11.5″ SOLD.

We don’t usually get much snow where we live during winter. But the 2017-18 winter has been spectacular! My husband took a photo from one of our winter hikes of this view we had of the First Broad River. This is a highly textured oil painting that is a 35 x 12″ gallery wrap that is custom framed and available for sale for $475.

Happy news recently … this painting, “Rainforest Waterfall” sold. I visited Puerto Rico with my family several years ago, and we toured the El Yunque Rainforest park. It was so beautiful! I cried after the hurricanes went through this past season and I saw the video coverage in the aftermath of the destruction of this area. I very much hope this forest can recover and the beautiful parrots native to this area survived the storms!

This interesting old barn with all its lines and little openings is on a back road in the NC mountains near Burnsville, NC. We found it on a day trip riding through the mountain two-lane roads. SOLD

This great blue heron is one of the thousands of water birds that live in Huntington Beach State Park in South Carolina. We found this one perched on a boardwalk that runs out into the salt marsh.

I’ve been working on two watercolors recently. I’ve completed one of them: “Chicamacomico Lifesaving Station, Outer Banks, NC”, 22 x 16″, $700 which includes matting and framing. This the restored Chicamacomico Life Saving Station in Rodanthe NC, on Hatteras Island. Before the Coast Guard, there were life saving stations scattered up and down the Outer Banks, which were staffed by local men who watched for ship wrecks and tried to rescue sailors. This one has been restored and preserves much history of bygone days on the Outer Banks.

And a second is in progress:

My newest painting is an oil on gallery wrap canvas called “Mountain Cabin.” I just love finding these old barns! Getting the texture of the old wood is a challenge I very much enjoy tackling. 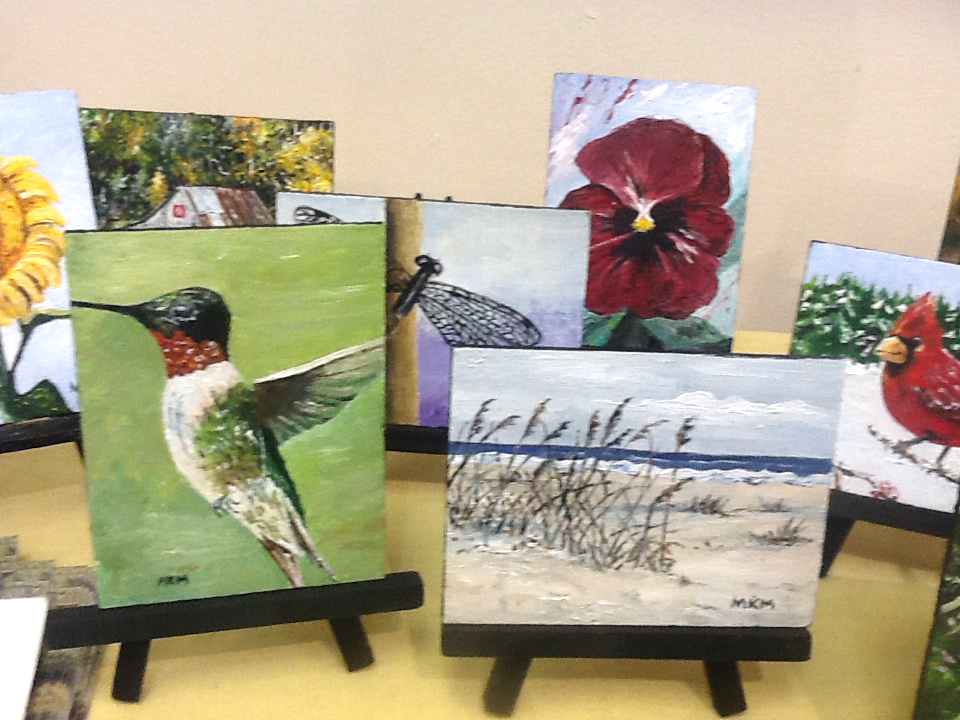 The holiday season is a busy time at Buffalo Creek Gallery. I have been busy making a number of mini paintings, which are so fun to do! Each of these pieces is 3″ x 4″ and comes with a mini easel to display the original artwork. They are $40 and on sale now at the gallery.

Wishing everyone a very merry holiday and a happy new year, too!

Good news today … I received confirmation that I have been accepted as a watercolor fine artist for the 2018 Artisphere weekend event in Greenville, SC for May 11-13, 2018. I am really happy! I was selected to show/sell for this event last year, and it was a fantastic weekend. It is a HUGE event that is held in the beautiful and historic downtown area. There is a beautiful river that flows right through the middle of the area, and it just a gorgeous landscape for a downtown area.

Last year, while I obviously needed to man my booth for the weekend, I did the get opportunity do a bit of walking around the festival, and I was so impressed with the quality of artists that are included in this event. Not only were there incredibly talented individuals from all over the US, but there were also spectacular demonstrations that included woodworking and blacksmithing.

Because I was accepted as a watercolor artist, that means I am restricted to showing and selling that media exclusively (my oil painting entry was not accepted). So my focus for the start of 2018 is to work on more watercolor paintings. This will be an exciting endeavor!